This repeat client has a beautiful contemporary home with a nautical flare overlooking the bay.  They love the mahogany kitchen that Jim Farris Cabinets built for them several years ago.

Now they were wanting to upgrade their existing decorative wall shelving above a base cabinet in their den (which happens to have a concrete floor) to something that worked better for them.  Because they didn’t know exactly what kind of shelving they wanted, we started looking for inspiration by viewing several photos that I have saved on Pinterest.  I used the couple of pictures they picked as the springboard for my design ideas.  I photographed their existing space and shelving and added dimensions using my Disto Sketch app on my iPhone.

Returning to my office, I did a scale layout on my computer.  I was inspired and came up with several design concepts.  The first thing I drew was the existing painted base cabinet boxes with granite countertop because that was going to remain.  For continuity in this open concept home, I suggested that we replace the painted doors on the lower unit to match the African mahogany kitchen cabinet doors and cover up the painted end with a mahogany end panel.

On most projects the client never sees all the design steps I go through.  As you scroll through the different concepts keep in mind that there are usually several steps between each numbered option.  Most projects do not require as many options as this one did.  After our second meeting we narrowed the choices down to three – Options 1, 3, and 7.  We also defined the requirement for spacing between the shelving.  From there I modified those concepts, and then the final decision was made – Option 3c.  After design approval came material selections, engineering, section drawings, and cut-lists.

The solid African mahogany started out as rough-sawn lumber.  We did a hit-and-miss pass through the planer just to get a better idea of the beauty beneath the rough surface of the wood.  With scale drawings and a cut-list in hand the guys milled the parts to size.  They selected the “ribbon stripe” grained lumber for the door panels.  The flat-cut grained lumber was selected for the stiles and the rails.  Fabricating the curved ends of the shelves with precisely located notches was a task perfectly matched for our CNC router.  Our sliding panel saw was used for cutting the vertical pilasters to length.  Each pilaster part was numbered and kept in order so that in the end the grain lined up vertically through the horizontal shelves.  Before finish work began all the parts were dry fitted to make sure all would go well in the final assembly.

All the parts were given a final sanding before finish work began.  Each part was carefully stained, wiped clean, and let dry before the sealer was applied.  We use ML Campbell’s Krystal sealer and topcoat.  Krystal is a post-catalyzed conversion varnish finishing system that offers the ultimate in durability.  It is a high-solids, water-white, non-yellowing formula specifically designed for interior wood surfaces that are exposed to extreme moisture, heat, or household chemicals.  Special care was taken when sanding and handling both the large and small wood parts during the finishing process.

Because of the heavy weight of the fully assembled unit we decided to deliver the shelving in parts and assemble the unit in place at the precise elevation that it would hang on the wall.  Before delivery the guys fabricated several delivery and installation aids.  You can see several of these in the photos taken during installation.  Fabricating delivery and assembly aids is a very common practice and a vital part of any project, but it was especially so on this project.  The guys used some of these aids to help them locate the hanger blocking precisely on the wall.  When the shelving was fully assembled, they simply slid it on to the blocking.  It fit like a glove!  With a few strategically located screws and recessed cover caps, the shelving was completely secure.

It was very rewarding to see everything come together to form a beautiful piece that was met with smiling approval and rave reviews. 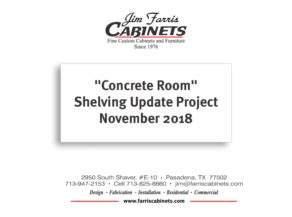 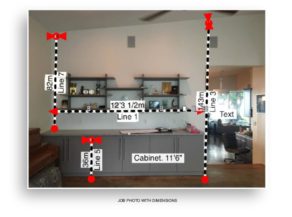 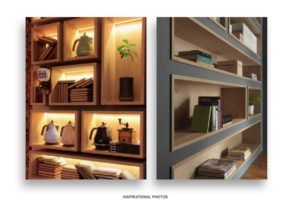 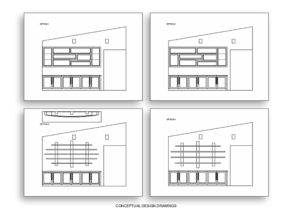 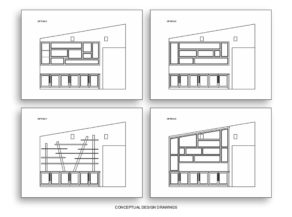 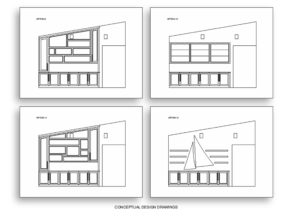 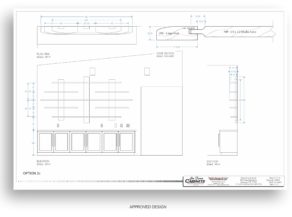 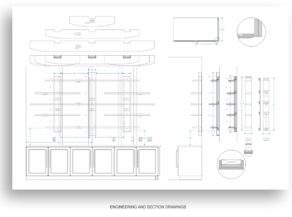 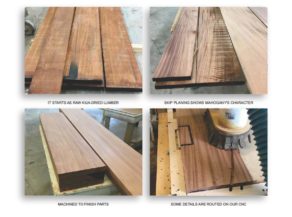 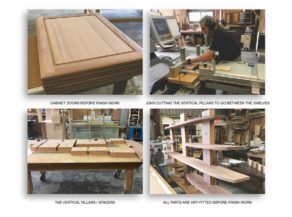 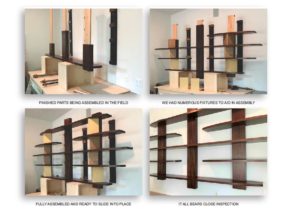 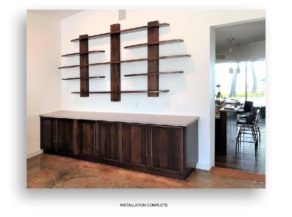 Monday - Friday 7am - 5pm
Evenings and Weekends
by Appointment Only